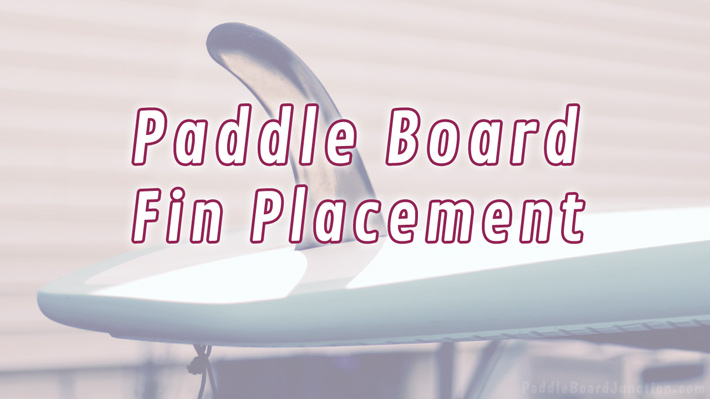 What’s the best fin placement on your paddle board?  Let’s go over some basic positions and show you how you can easily make adjustments to your SUP fin!

You’ve been having fun with your new stand up paddle board and you finally started looking over its components with greater scrutiny.  Most of the parts are simple to understand… all except the arrangement of fins!

Whether you have a single fin board or some multiple arrangement of fins it isn’t too complicated to setup your fin(s).  Let’s go over some watercraft fin basics to give you a basic understanding.  You’ll then be able to choose the best placement for your fin based on your current paddling conditions.

Unless you want to spin around in circles like a puppy chasing his tail you need at least one fin on your SUP.  The fin keeps the board travelling in a straight line.  The fin’s purpose is especially appreciated in sideways water currents and wind.

Without a fin wind will spin your board around and push you in directions you don’t want to go!

You’ll notice that the large fin in the center can be removed.  This is a huge improvement over the original fins that were permanently attached to surfboards years ago. Why a fin box is important:

How to Adjust Your SUP Fin

For most fin setups you don’t even need any tools to remove, attach or adjust the fin’s placement!  (you may need a screwdriver, however but that’s still not too bad)

How cool is that?

Towards the rear of the fin you’ll notice a little flat piece of metal sticking up.  This flat piece of metal is the head of a screw.  The screw goes through a hole in the rear of the fin and ultimately screws into a small metal plate that sits inside an internal track in the fin box itself.  This little metal plate is really the nut that the screw gets screwed into.  (Careful not to lose it… more on that later!) If you lose or strip the the screw you can replace it with a suitable size from the hardware store.  You’ll need to use a screwdriver to secure the fin in place.

Unless the replacement screw is made of quality stainless steel you’ll only want to use this screw for the short term.  The last thing you need is a rusty screw permanently rusted in place.  This would prevent you from moving or removing the fin from your paddle board.

Once you get understand how the fin attached to your paddle board adjusting the fin is easy.

That’s it!  It really is simple. Now that you know how to move your sup fin around let’s figure out the perfect placement for it! For most normal flat-water riding conditions you’ll be best served buy putting the fin near the back. Sliding the fin to the rear is optimum for most situations!

As you move the fin up, closer to the front of the board the fin has slightly less ability to keep the board moving straight.  The one benefit is a board that turns faster.  A front positioned fin will give you a shorter turning radius.  You can maneuver the SUP around sharper turns better.  It does this at the expense of the board’s ability to track straight. Only position the fin towards the front if need to shorten your turning radius. (not typical)

Most riders make casual turns and plan out their course over great distances.  So unless you are whipping around buoys like a slalom skier or carving out turns during wave riding, keep that center fin pushed towards the back of the board.

As always, you can experiment for your individual conditions and see how different fin positions affect the feel and performance of your board.

Wanna geek out? … this guy’s nuts about fins !

Don’t leave your fin in your paddle board for extended amounts of time.  The nut / screw can freeze or rust together.  The fin box can also get gunked up with grime over long periods of time.  I’ve noticed this with my boards (both paddle and surf) over the years… especially the ones that spend time in salt water!

Every once and a while take the fin out and spray the insides out with a powerful hose.  I like to to make sure my plate nut and fin screw are washed with fresh water.

At the end of the season I usually spray them with lubricant (a-la WD40) before putting away my wares for the winter.  The lubricant helps prevent corrosion.

Unfortunately, your paddle boarding fin is useless without that tiny screw and plate nut.  When Zoe and I travel with our boards we stack them.  This requires us to remove the fin from my board.

I found out the hard way that the little plate nut inside the fin box can fall out.

You guessed it… we got all the way to the beach and I couldn’t attach my fin.  What a disappointment.  Somehow in our travels the plate nute wiggled its way out of the fin box.

Now when I remove the fin I take out the plate nut and assemble everything securely back onto the fin; only the fin is not in the board at this point. I also keep a couple of screws and plate nuts in the truck at all times.  It’s a small insurance to pay for avoiding the worst disappointment ever… not being able to paddle board after getting to the water.

Paddle on my friends!

How to Ride a Paddleboard

7 Ways to Get a Workout on a Paddle Board