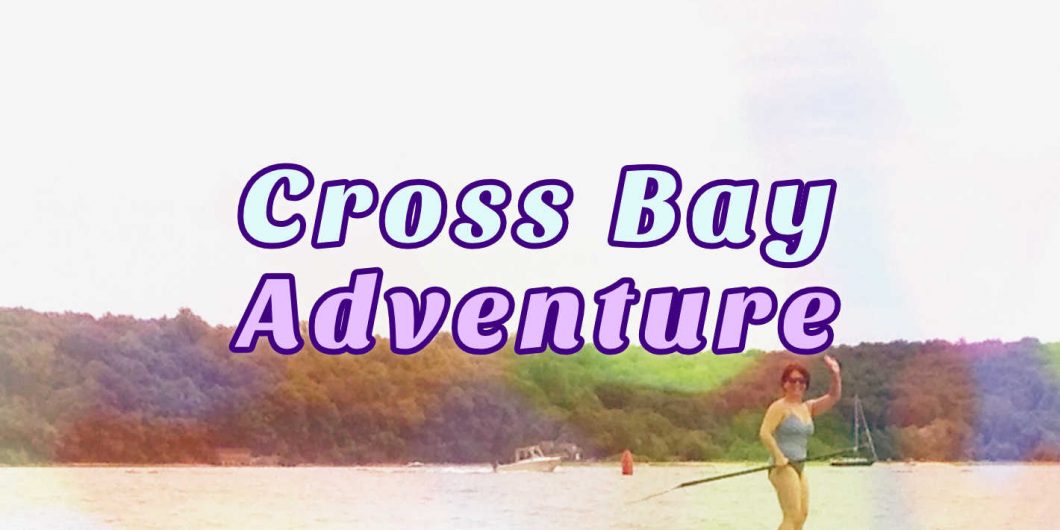 We decided to try out our new try paddle board dry bag by paddling a semi-new excursion on the northern coast of Long Island.

While visiting family in New York we of course brought our paddle boards!  I mean they are usually the first consideration and the first thing to get packed.  I finally got a dry bag which is something I had on my radar for a while. I’m not sure why it took so long to get one.  Dry bags are not expensive at all.

Well, we decided to do a long one-way excursion.  The thing about oneway paddling adventures is you need somebody willing to either pick you up or drop you off.  My father was more than willing to drop us off at this neat little spot in near Lloyds Neck, NY. Actually the location may even be Oyster Bay.  I’m not even sure and we didn’t really care about the specifics. All we knew was we were getting a ride to a quaint little launch spot that was really far from where we were currently sitting and planned on paddle boarding back to.

It was a beautiful morning with not too much wind and just the right morning chill to the air.  This was welcomed considering we were in the height of summer and things would progressively get hotter throughout the morning. It was approaching high tide which was factored into our launch time.

The launch spot was littered with kayaks and some old row boats, watercraft trinkets of all the locals whom actually utilize the beautiful waters that surround their homes.

My father dropped us off, I stuffed our gear into the dry bag and off we went.  We headed north towards the Long Island sound hugging the west coast of Lloyds Neck.  This is the extreme eastern end of Oyster Bay Harbor. After taking our time and getting warmed up we cut across into Oyster Bay Harbor.  The wind was picking up and so were the waves. It seems all of the boaters were making their way somewhere other than where they were.

Below you can see a picture of me.  The boat behind me is Billy Joel’s “Alexa”.  He wrote a song about that boat.  His mansion (not pictured) sits just to the right of that pier. Zoe and I have come to enjoy waves.  Whether natural or manmade via boat wakes, waves make paddle boarding more challenging and in our opinion more fun.  There is only so much standing around on a calm lake we can take.

We love the excitement of paddling into big waves, trying not to fall off and smiling the whole way.  We are like kids out in these conditions… You can hear us shouting across the water “Did you see that!” and “That was awesome!”  Honestly, there is nothing better.

As we made our way further west about halfway back to our destination things really got rough.  There were gigantic yachts plowing through the water. Some of these boats had to be well over 50 feet long.  They were headed in all kinds of directions. Some were headed out to the Long Island Sound and many were cruising north up towards West Harbor, the very location I used to lifeguard as a kid!

It’s hard to gauge wave height but we were so deep into the troughs of some of these boat wakes that we could only make out the top portions of each other’s bodies.  The waves were so big they partially obscured our vision.

We pressed on westward across the bay, challenging waves and fighting the growing wind and made it to the Shore Road coastline. According to the google map route I drew out that morning we had about 2 miles to go.  Zoe was getting tired and the tide was now going out. As the water was pouring out of all the upper waterways our progress got slower.

We were fighting the tide.  We were heading in and the water was flowing out!

We had to cross under a tiny drawbridge where the waterway got so narrow you could see the tide rushing out furiously like water that had been waiting at a drain plug and it finally had been pulled!  That was the final straw. We fought and fought to just barely make it under the bridge and out into open waters. We were still one mile from our destination and the tide was really pouring out.

We made a calculation at that moment.  Even if we do fight the tide all the way up the creek to our final destination the tide could be low to point at which we would end in mud. Seeing just how hard the wind was blowing against us and knowing I had packed my cell phone in our new dry bag we called it quits. We paddled to a clam shack / restaurant parking lot that was on a few hundred yards away.  I telephoned my father and he picked us up promptly.

It was tempting to feel like a failure but there is glory in getting hurt and no shame in playing it safe.  Safety is always the way to go… especially when you are in your 40s and would like to go paddling the next day!  We could have made it up the creek but to prove what? We would have been miserable and too wrecked to paddle the next day.

Live to paddle another day!