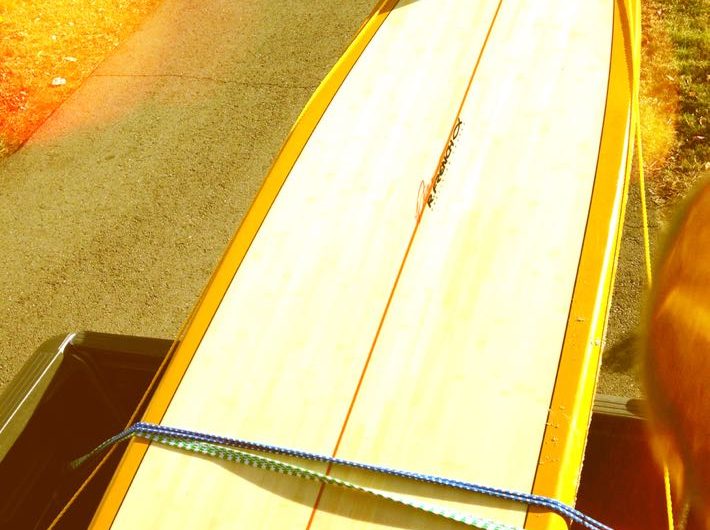 At 10 foot 4 inches my wife’s paddle board is somewhat of a beast. Actually I’m finding out that compared to most other paddle boards her’s a wee bit shorter and a whole lot lighter in weight.

Even still getting it to stay safely in the back of my little silver pickup truck is concerning me. I know that highway speeds + wind can wreak havoc on tied down items in transit.

And a giant paddle board? That’s nothing more than a really expensive, thin, projectile just waiting to catch the right wind gust and go flying out onto the highway!

So what to do?

Since I don’t have any king of rack system I’ll have to rely on positioning the SUP in the bed of the truck and tying it down as best as possible. My truck has four rings spaced out along the inside of the bed. I would definitely be using these to somehow secure the board.

The solution I arrived at for tying down the SUP in the bed of the truck is as follows:

Using a combination of ropes and bungee cords I:

It’s tempting to just “tie down” the board from the rings. I avoided this because about 40% of the board hangs out of the back. It wouldn’t take much wind or a bump in the road to make that end swing down like a see-saw. Yikes!

Using a pair of ropes each tied to a bungee chord keeps the board’s tip snug against the front of the trucks bed. To prevent damage to the board’s nose tip I placed an old seat-cushion between the board’s tip and the truck’s bed.

Here’s a photo of one of my homemade straps: To cushion the board on the second touch-point, the tailgate, I simply folded up a towel and used it as padding.

Does it work well?

I’m so glad you asked…

It works perfectly! I’ve hit tons of bumps while driving. I’ve also gone 75 miles per hours with the board in the back. No problems whatsoever. As you can see I am transporting 2 boards at once in the back of my pickup truck.  With a towel as a pad and some bungees and rope it really doesn’t get any more DIY and cheaper than this!  I’ve driven thousands of miles over the past couple of years with the boards like this with no problems what-so-ever.  I can even fit our mountain bikes on either side of the boards.  The only thing I don’t like about this setup is the fact that I have to take the fin out of the top board each time I transport them.  This is due to the fact that the boards have to both be pressed up against the front of the truck’s bed, towards the cab. For padding against the bed I keep the board’s noses safe with an old cushion.  Yep folks in good ‘ol cheapo fashion I simply position an old cushion from a patio chair in between the noses of the paddle boards and the bed of the truck.  I also stick a small moving blanket in between the boards for some added protection but since the boards already have a deck pad this probably isn’t even needed.